The Bird is the Word 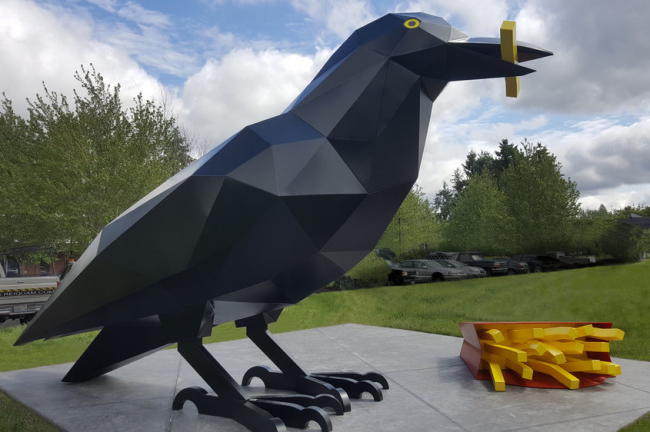 Have you ever noticed crows playing games in the air with their food, or cleverly dropping nuts from great heights to crack them open on the pavement below? Did you know that crows can even create and use tools to solve complex puzzles? Crows are known as one of the most intelligent species in the animal world. They can imitate other birds, cars, and even learn to speak if socialized with humans. Crows can recognize individual people and form a relationships with humans, pick a person out of a crowd, follow them, and remember them - for years!

In late 2017, the City of Auburn began the process of commissioning an artist to create an iconic public art piece for Les Gove Park to be sited on the newly renovated property of the park that extended to Auburn Way South. The site was identified in the 2015 Les Gove Master Plan as a potential location for something iconic to serve as a canvas to help announce the park to cars driving by on Auburn Way South. The site was formerly a Triple XXX Root Beer Drive-In and then Big Daddy’s Drive-In. The property was purchased by the City in 2014 using a 50% matching grant from King Conservation Futures.

Peter Reiquam has been successfully creating interactive, site specific public art for over 30 years. Each of his projects is a “unique response to the special character of a given site, inspired by its history, culture, architecture, and surrounding landscape.” Inspired here by the history of the site as well as the countless playful crows that frequent Les Gove Park, Reiquam has designed a large-scale sculpture titled “Crow With Fries” that is slated to be installed in late spring 2019. The sculpture will be a visible landmark that will encourage public interaction, whether sitting on the oversize package of sculptural french fries, or posing for a selfie with this winged creature. The 12 feet tall and 18 feet long artwork, currently in the fabrication phase at Reiquam’s large custom-built Georgetown studio, will be welded with precise aluminum panels and then powder coated, making this delightful sculpture incredibly durable and able to stand the test of time for the enjoyment of the Auburn community for many years to come.

Visit the Crow and tag your photo with #crowwithfries #exploreauburn #auburnadventrues before the crow flies away!